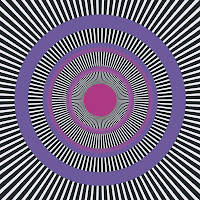 [Source: New Scientist, David Robson] – The cause of an optical illusion, made famous by a 1981 painting, has finally been solved.
See a slideshow of that illusion and others.
Neuroscientists have shown that the way our eyes constantly make tiny movements is responsible for the way concentric circles in Isia Leviant’s painting ‘Enigma’ (see image, right) seem to flow before onlookers’ eyes.
Susana Martinez-Conde and her team from the Barrow Neurological Institute in Phoenix, Arizona, tested whether the effect was down to tiny, involuntary jerks of the eyes, known as microsaccades. Their purpose is not fully understood, but the rate of these movements is known to vary naturally.
In the team’s experiment, while three subjects viewed Enigma, cameras recorded their eye movements 500 times every second. The subjects were asked to press a button when the speed of the optical “trickle” of the illusion appeared to slow down or stop, and release it when the trickle seemed faster.
Faster flicker
Accounting for the reaction time required to press the button, the results showed that the illusion became more pronounced when microsaccades were happening at a faster rate. When the rate slowed to a stop, the illusion vanished.
Those results go against earlier findings that suggested eye movements were not responsible for the effect.
A previous study involved giving volunteers contact lenses with tiny stalks attached that held a version of the illusion, ensuring, the team thought, that it was always stationary relative to the eye. The volunteers still experienced the illusion, suggesting that the brain actually caused the phenomenon.
But the effect of microsaccades was not taken into account, says Martinez-Conde, since the contact lenses do not keep pace with the eye during such rapid, jerky movements.
“We can now rule out the idea that the illusion originates solely in the brain,” she told New Scientist.
Martinez-Conde adds that their research may also explain other similar illusions, such as Bridget Riley’s Fall, or the Ouchi illusion. “It would be unexpected if Enigma is the only illusion affected by eye movements,” she says.
See a slideshow of that illusion and others.
However, the researchers are still in the dark as to what brain processes link the eye movements and the perception of an illusion. They intend to develop new experiments to find out.
Journal reference: PNAS (DOI: 10.1073/pnas.0709389105)