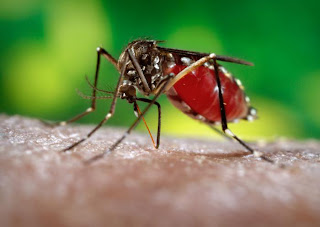 [Source: Deborah Daun, BIO5 Institute] – Few things sting like a mosquito’s bite–especially if that bite carries a disease such as malaria, yellow fever, Dengue fever, or West Nile virus. But if a team of University of Arizona (UA) life sciences researchers has their way, one day mosquito bites may prove deadly to the mosquitoes as well.
“Our goal is to turn the female mosquito’s blood meal into the last meal she ever eats,” explains project leader Roger L. Miesfeld, a professor of biochemistry and molecular and cellular biology in the UA College of Science and a member of BIO5 and the Arizona Cancer Center.

Other UA researchers involved with the project include Patricia Y. Scaraffia, Guanhong Tan, Jun Isoe, BIO5 member Vicki H. Wysocki, and the late Michael A. Wells. These researchers have discovered that one particular mosquito species, Aedes aegypti, has a surprisingly complex metabolic pathway, one that requires its members to excrete toxic nitrogen after gorging on human blood. If the mosquitoes fail to do so, they’ll also fail to lay eggs–and will likely sicken and die. Scaraffia, a research assistant professor in UA’s department of biochemistry and molecular biophysics, and the other members of the team are publishing their findings in the January 15, 2008 issue of the Proceedings of the National Academy of Sciences. The research was funded by the National Institutes of Health.

Miesfeld and his colleagues are seeking a molecule that is harmless to humans, but that will gum up the works of mosquito metabolism, forcing the mosquitoes to hang onto the nitrogen. Such a molecule would kill both the mosquitoes and their would-be progeny–thus slowing the spread of disease. Once found, this molecule–and similar molecules aimed at other mosquito species–could be developed into an insecticide and sprayed in places where mosquitoes congregate, such as around water and on mosquito netting.

The researchers envision one day also developing an oral insecticide–a mosquito-slaying pill that members of a community with a high instance of, say, yellow fever or malaria might take in order to reduce the mosquito population. The pill wouldn’t be a vaccine; if someone who took it were then bitten by a disease-carrying mosquito, they would still become infected. However, the mosquito would ingest the insecticide, along with the human blood, causing her to bear fewer young and possibly die before she could bite anyone else. “The whole community would essentially become one big mosquito trap,” Miesfeld explains, and over time, mosquito populations and disease rates would both decline. “It would be a group effort that in the long run could have a huge impact.”

In a world where both mosquitoes and the diseases they carry are becoming increasingly resistant to known insecticides and medicines, finding new ways to fight them is crucial. “This would be one more weapon in our arsenal against diseases that kill millions of people a year,” Miesfeld says.