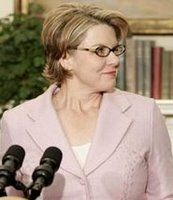 [Source: Associated Press] — Low participation in math and science activities by girls is keeping them from achieving their full potential and weakening the nation’s ability to compete, Education Secretary Margaret Spellings said Monday. “We need definitive insights into what goes wrong, when and why,” Spellings said. She asked her department’s Institute of Education Sciences to review existing research and determine why girls are not as well represented in the sciences as boys.

Schools have put more emphasis on math in the past five years because of the No Child Left Behind law, which requires testing and yearly progress in the subject. “This is all about global competitiveness,” Sen. Ron Wyden, D-Ore., said at conference sponsored by the Education Department and the National Science Foundation. “We cannot do what we need to do to create high-skill, high-wage jobs for our country if we write off the prospects of half our population.”

Government data show that girls fall behind boys in math and science as they progress through school. In the fourth grade, 68 percent of boys and 66 percent of girls say they like science, according to the National Center for Education Statistics. But only one-third of high school students enrolled in Advanced Placement physics classes are girls, Spellings told summit attendees. At the college level, she continued, fewer than one-fifth of engineering majors are women. Former astronaut Sally Ride suggested several strategies for keeping girls interested in math and science, including involving them in after-school or summer programs. She also recommended introducing girls to women scientists. “Allow them to put a female face on these careers,” she said.

Ride emphasized the importance of involving parents and preventing perpetuating stereotypes that girls are not good at math or science. Spellings said mothers can inadvertently send signals to their daughters that math skills are not important. Educators must change the culture so it is not acceptable for women to brag about not being able to balance their checkbooks, she said. A National Mathematics Advisory Panel created by Bush last month is scheduled to issue an initial report on how to improve math teaching by the end of next January and a final report a month later.