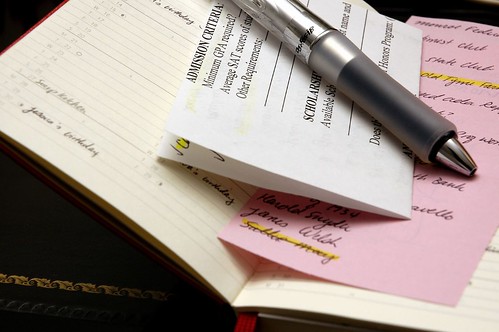 And we have 23 days left before apps are due! Here’s Michael Weingartner (’09), describing his Flinn Scholarship application process.

Allow me to preface this message with a note of congratulations not only on your academic achievements to date, but also on your good sense to apply for this Flinncredible scholarship. (Yes, I just made a Flinn pun. We all do it. Get used to it.) The Flinn Foundation Scholarship is a wonderful opportunity, and as a recipient, I highly recommend the application process to anyone, no matter how daunting it might seem at first. The rewards are well worth it. No, scratch that… the rewards are ridiculously well worth it. Like, no contest. This having been said, allow me to relay to you the inspiring story of my own application/interview process.

To begin, I have absolutely no idea how I was chosen for this scholarship. I had never met a Flinn Scholar and only vaguely knew what the program was about. My school had never had one and so when it came time for me to fill out the application, I was more or less on my own. I wrote and revised my essays. I showed them to my mother. She changed them. I changed them back and submitted my application about a week before the deadline.

They told me I had an interview. I had never interviewed for anything before. Ever. During my semifinalist interview, I spoke about tap dancing and tomato sauce. Apparently that worked, because I got a second interview.

I was feeling pretty good about myself, but when I started to meet the other students who had made it to the various interviews and I got to hear about everything that they’d done, from studying abroad and winning state debate tournaments to working closely with the governor’s office and interviewing Kristi Yamaguchi (all of these, by the way, are true), I became somewhat discouraged. I had done some impressive things in high school, but compared to these kids, I felt pretty out of my league.

If this happens to you, don’t let it discourage you. Because when they say that “there is no typical Flinn,” they really, REALLY mean it.

They’re not looking for somebody specially picked out ahead of time, and they aren’t looking for somebody with a particular resume. What they’re looking for is to get to know you, and that is my advice: Be yourself, 100%. If you’re a dancer, be a dancer. If you’re a Democrat or a Republican, let that shine through. You don’t have to prove anything, except that you are a thoughtful and unique individual (which, in case you weren’t sure, you already are), and that you deserve this opportunity.

It’s just too good of an opportunity to pass up. Apply and do your best. I’ll be very excited to meet you, and good luck when you go into your Flinnterviews (see, I just did it again.)